Climate-Driven Megadrought Is Emerging In Western US, Study Finds 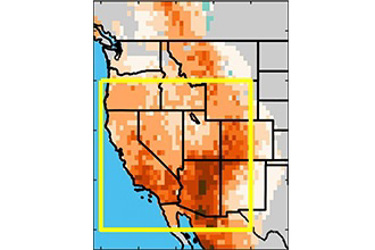 Warming may be triggering drought worse than any in recorded history

With the western United States and northern Mexico suffering an ever-lengthening string of dry years, scientists have been warning that climate change may be pushing the region toward an extreme, long-term drought worse than any in recorded history.

A new National Science Foundation-funded study says the time has arrived: a megadrought as bad or worse than any detected since prehistoric times is very likely in progress, and a warming climate is playing a key role. The study, based on modern weather observations, 1,200 years of tree-ring data and dozens of climate models, appears in the journal Science.

"Earlier studies were largely model projections of the future," said lead author Park Williams, a bioclimatologist at Columbia University's Lamont-Doherty Earth Observatory. "We're no longer looking at projections, but at where we are now. We have enough observations of current drought and tree-ring records of past drought to say that we're on the same trajectory as the worst prehistoric droughts."

Reliable modern observations date only from about the year 1900, but tree rings have allowed scientists to infer yearly soil moisture for centuries before humans began influencing climate. Previous research has tied catastrophic, naturally-driven droughts recorded in tree rings to upheavals among indigenous medieval-era civilizations in the Southwest.

The new study is the most up-to-date and comprehensive long-term analysis, the scientists say. It covers an area stretching across nine U.S. states from Oregon and Montana through California and New Mexico, and part of northern Mexico.

Using rings from thousands of trees, the researchers charted dozens of droughts across the region, starting in A.D. 800.

"This study provides a unique, long-term perspective of hydroclimate extremes such as the megadrought the U.S. Southwest has been experiencing for the past 19 years," says Soumaya Belmecheri, a program director in NSF's Division of Atmospheric and Geospace Sciences.