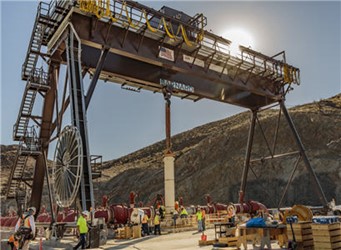 More than 42 million tourists traveled to Las Vegas in 2018 to see the shows, the entertainers, and the gambling halls that make the city one of the nation’s most popular travel destinations. The Las Vegas valley is also the home of more than 2.25 million residents, easily the most densely populated region in the state of Nevada.

What the tourists and the residents do not see, however, is a unique vision for the future that is being implemented about 30 miles to the east of the city. That’s where the Southern Nevada Water Authority is building the Lake Mead Low Lake Level Pumping Station, a $650-million, five-year project that plans to open next year.

The project is critical to ensuring the region’s water supply. When it’s completed, it will have the capacity to produce more than 900 million gallons of water each day from hundreds of feet below the surface. The station is a sophisticated, complex, and expensive safety net that addresses the consequences of climate change. A drought that started in 2002 has caused elevation in Lake Mead to fall more than 130 feet.

“It will take many years of incredible snowpack for Lake Mead, Lake Powell, and other reservoirs to recover from this long-standing drought and the consequences of climate change,’’ said Erika Moonin, SNWA project manager.

Power Of The Pumps

The engines behind the sophisticated system are 34 pumps manufactured by Spain-based Indar. There are 22 low lift pumps, and 12 high lift pumps, and each has the capacity to generate 30 million gallons of water per day. “That’s more than 250 bathtubs every second,’’ said Dirk Wulf, project manager at Indar.

The 23-foot-long low-lift pumps weigh about 68 tons while the high-lift pumps are 30 feet long and weigh 79 tons. They were lowered into place with a 220-ton gantry crane. The Indar pumps consist of multistage centrifugal pumps directly coupled to a submersible electric motor in an inverted configuration and are designed for permanent submersible operation of clean water. The motor includes a cooling shroud that ensures the cooling flow with the discharged water. The pumps are set with 13,800-volt motors that range from 3,150 HP to 5,200 HP.

“We have considered every single detail in order to make this pumping station be one of the most advanced and efficient pumping stations in the world,’’ Wulf said.

The pumping station includes a 525-foot deep access shaft with a 26-foot diameter. Pumps draw water from a forebay, a 12,5000-square-foot cavern that is 500 feet below the pumping station. The water then enters the header pipe and flows through two large-diameter aqueduct systems to deliver water to two treatment plants. 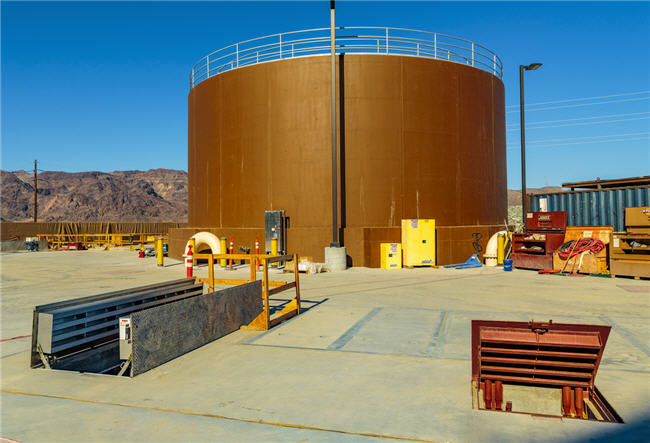 The low-lift pumps will deliver raw water to the Alfred Merritt Smith Water and the high-lift pumps will deliver raw water to the River Mountains Water Treatment facility. The water is treated with ozone and then goes through a filtration system before entering the transmission system and, eventually, the homes in the Las Vegas valley. The pumping station does not draw additional water out of Lake Mead. “It is a backup, redundant pumping station to use in the event our other two pumping stations are unable to pump due to lowering lake levels,’’ Moonin said.

Valves at the pumping station are protected by 12 floor doors manufactured by The BILCO Company of Connecticut. Workers for Barnard of Nevada, Inc., the general contractor for the project, strategically placed the doors on the project’s vaults, which house and provide access to large diameter valves. The doors are reinforced for AASHTO H-20 wheel loading. Single- and double-leaf doors were used in the project and will allow workers to access valves that require adjustment and perform maintenance on the pumps. 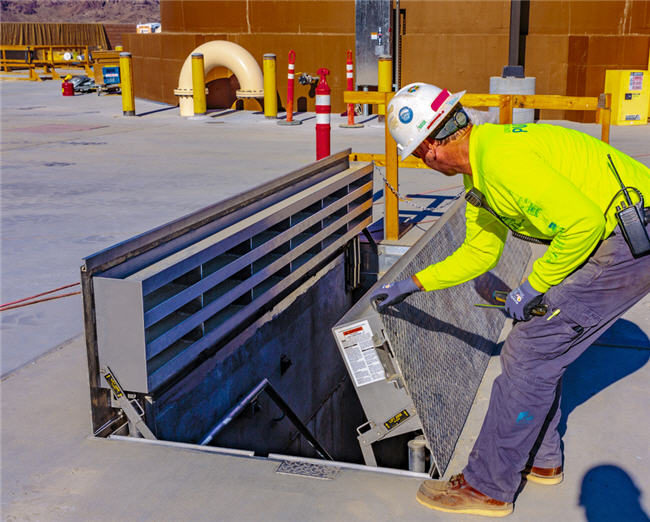 Lake Mead is the lifeblood of not only Las Vegas, but other regions of the Southwest United States. The man-made lake is the largest reservoir in the U.S. in terms of water capacity, serving water to Arizona, California, Nevada, and some parts of Mexico.

The lake is 122 miles long, has a surface area of 247 square miles, and sits just seven miles from Hoover Dam, which delivers water and electric power. Lake Mead is fed largely by the Colorado River, which is responsible for an economic output of $1 trillion. Nearly 16 million jobs rely directly on the river, and water is used by communities all along its 1,450-mile path.

“It’s really an unsung project, but it’s important for the Las Vegas community to guarantee their water supply,’’ said Tyler Askin, project engineer for Barnard. “It’s one of those projects a lot of people are unaware of. It’s not alongside a highway where you can see progress every day. Water’s not something people think about until they don’t have it. This will help make sure that doesn’t happen.”

Thomas Renner writes on building, construction, engineering, and other trade industry topics for publications throughout the United States.