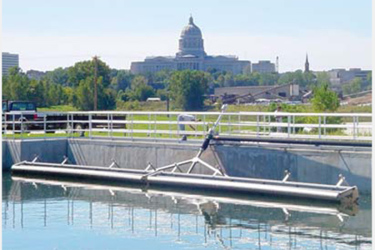 Jefferson City, the Capitol of Missouri, has operated a sanitary sewage collection system dating back to the 1800s. The generations of infrastructure included a trickling filter treatment plant that first entered service in 1967 and underwent major upgrades involving screening, primary clarification, and secondary treatment over the course of 1969-77. A number of operational issues had emerged by 2000 when planning began for a facility to handle the daytime capacity for a population of 50,000, high wet weather flows, effluent quality, and odor emissions. The plant had reached its capacity and was at the end of its design life, at times, operating in violation of permit requirements.

The city required a variable capacity solution that would meet current needs and also allow for peak flow rates. An improvement plan called for a 60-MGD, versus existing 25 MGD pump station, on the south side of the Missouri River that serves the majority of the service area; replacing the damaged force main atop the riverbed; and tripling the utility’s treatment capacity. The project also elevated the plant two feet above the 500-year floodplain.

“We were essentially pouring seven gallons of water into a five-gallon bucket during wet weather flows.”